No pre-booking necessary for our self guided tours...
Just turn up and pay on arrival.

The chemical formula of this Copper mineral Chalcopyrite is CuFeS2

Part of Britains Biggest Adventure with Bear Grylls was filmed here at Sygun Copper Mine. 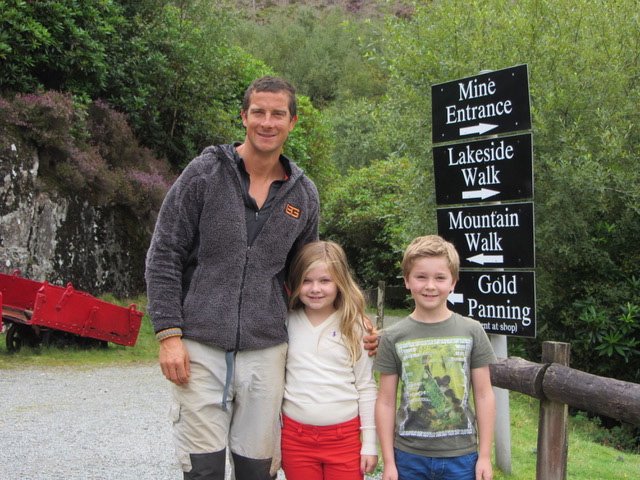 How do you get copper from rock?

First you have to grind the ore to a powder. Then you separate the copper minerals from the waste (see the Flotation Process below). Then you need to heat the powder with carbon to burn off impurities. This is called smelting.

Less that 1% of copper ore is copper.

Flotation was a new process that used oil and water to extract minerals. The Elmore brothers, Frank and Stanley who owned the mine with their father, invented a way to use flotation to extract copper minerals on a commercial scale. They installed their new system at Sygun.

During the bronze age (around - 2100BCE to 750BCE in Britain) they found that adding a bit of tin to copper made a stronger more durable substance to make things such as tools, weapons, pots and jewellery. Bronze age artifacts have been found in Anglesey.

In the 17th century a mining commission was set up to develop mining and extraction techniques within UK mines. During the Industrial revolution the demand for copper increased. Sygun Copper Mine and other copper mines in the North Wales area, such as Parrys Mountain in Amlwch and the Great Orme in Llandudno, were an important source of copper. But the demand for copper increased. Eventually these smaller mines couldn't keep up and were overtaken by competition from abroad.

Today it's cheaper to recycle copper than to extract it!

500 million years ago
Copper rich Ordovician rocks are formed
2100BCE to 750BCE
Bronze age in UK mining begins as surface excavations
Roman times
Tunnels were dug to get to the mineral viens deeper in the mountain. After the Romans left mining continued on a small scale until the Industrial Revolution started
1700 to 1900
During the Industrial Revolution tunnels were drilled lower down the mountain to reach the copper rich veins deep in the mountains core.
mid 1800s
Electricity increased the demand for copper wires so they needed to import cheaper copper from abroad and Snowdonia mines couldn't compete
1898
Flotation Process was developed at Sygun which meant they could get more Copper out of the ore.
1903
The mine closed - unfortunately there wasn't enough copper to make it worth keeping open.
the 1900s
after the mine was abandoned Stalactites and Stalagmites were formed as water trickled through the old tunnels
1986
Sygun Copper Mine was renovated and opened it's doors as an educational tourist attraction.